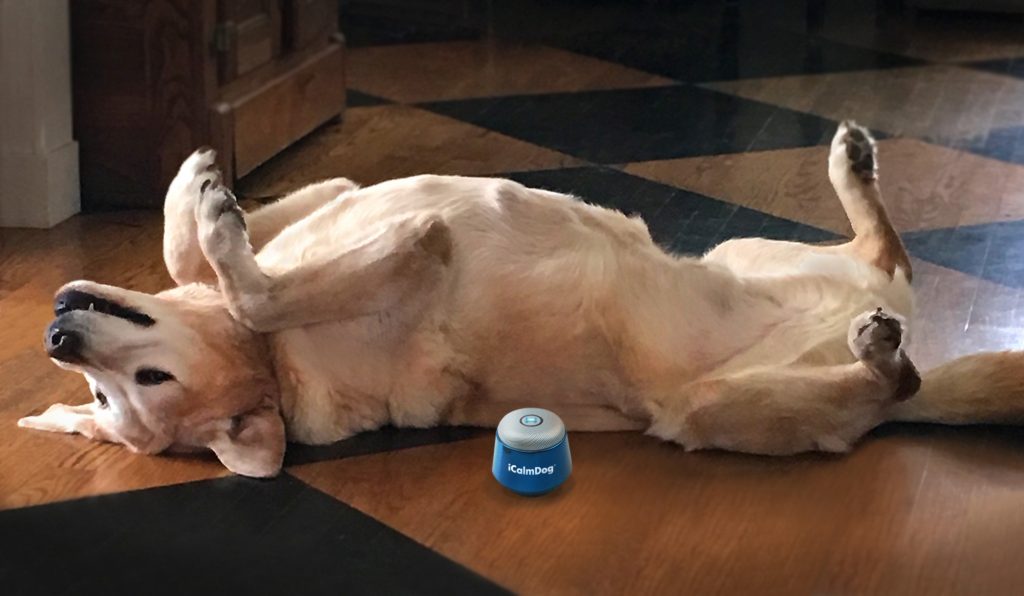 Four years ago, Sanchez was experiencing intense neck pain. My holistic veterinarian doesn’t have x-ray machines, so I took him to a neighboring clinic that does. I was told he would need to be sedated unless he could lay completely still on his back for the x-ray.  Not only was this a clinic that was new for him, but the veterinarian didn’t exactly have a calming presence. And, I wasn’t allowed to go into the x-ray room with Sanchez.

Fortunately, I had Through a Dog’s Ear downloaded on my iPhone. So, I asked if I could send in Sanchez’s calming music with him on my phone. The vet gave me a strange look, and then said, “well…. ok.” About 10 minutes later, he walked Sanchez out of the x-ray room and said, “We’re done. No need to sedate, he laid still and listened to the music. By the way, what is that magical music anyhow?”

I then realized the need for portable calming canine music and that experience planted the seed for iCalmDog. The clinically tested music in CD format was already calming hundreds of thousands of dogs at home and in shelters. What if dogs had a device that played their own music and could be taken anywhere? After all, people listen to their music on their mobile devices. What if Buster had his own specialized music on a player designed for him… sort of like an iPawd for dogs? 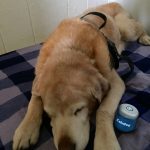 It turned out Sanchez was diagnosed with a slipped disc in his neck. Fortunately, he responded very well to acupuncture treatment, and it literally saved his life. Little did I know then how much I would need him to lay still during treatment. Taking iCalmDog to the vet clinic became a routine for us. Well, until my vet supplied iCalmDogs in all of her treatment rooms, so I didn’t need to bring my own. 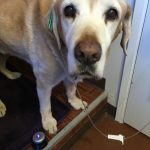 More recently, Sanchez was recovering from E. coli. It was really touch-and-go for awhile, and I feared I was going to lose him. During that time, I was giving him subcutaneous fluids daily, cooking all his meals, and trying to never leave home alone. I was worried sick. My 13 and 1/2 year old Labrador seemed suddenly very old and frail. 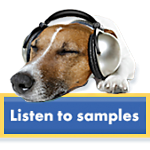 For a 3-week period, I was playing his favorite calming music, Elderly Canine on his iCalmDog almost around the clock. The soothing sound tracks were such a comfort to us both, I’m not sure who it helped more. And while he wasn’t up for his nightly bonding time through training, we shared some very tender moments together listening to music. 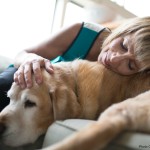 I’ll never know the full impact of music in his healing process, I’m just so grateful that Sanchez is just about back to his normal old self. And while we’re again training every night with yummy treats, we’ve also been enjoying some cuddle time together in the evenings while listening to his favorite music.

Has music helped heal your dog (or you)? Thanks for sharing your experiences in a comment below.

(Aside note: I can’t tell you how rewarding it is to walk into a very quiet vet clinic, see calm pets, and hear nothing except music especially designed for dogs and cats. I gave up my concert career to create music for our beloved 4-leggeds, and this is one of the ways I’m reminded that it was worth it.)

6 thoughts on “Can Music Really Heal Your Dog?”