We’re all about creating music for dogs and cats at iCalmPet. But, on National Dog Day, the dogs are taking over my blog and making their own music.

Rescue dogs plays the organ. Uh-oh. Did she play a wrong note?

I found this video of Rev in a Mashable post. According to Rev’s owner, he’s been played the same Adele song since being a tiny pup. He clearly recognizes the tune and is quite enthusiastic about singing along. Karaoke for dogs?

Tucker’s owner didn’t know he had such a musical dog until he received noise complaints when he was gone. This is what he found on his nanny cam. Good boy Tucker!

Got a birthday to celebrate?

Celebrate dogs and music by take a soothing sound bath with your pup. 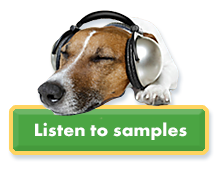 Enjoy soothing music specially designed to calm the canine nervous system. Humans have been known to also benefit from the slowed down, simplified classical piano music. And calm gets easily transferred to the other end of the leash.

Featured Posts
As seen in…