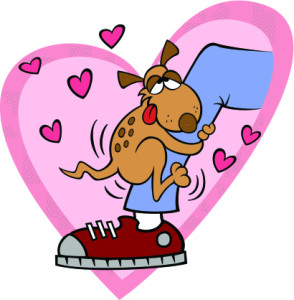 As a blogger for Care2.com, I was pretty shocked when I read in Care2 causes about the male dog who was abandoned because his owner thought he was gay after he was found mounting another male dog. Fortunately, he was rescued hours before he was scheduled to be euthanized.

Humping behavior in dogs is often anthropomorphized and misunderstood. It may look like sex to humans, but unless it’s an intact male that is mounting a female dog in heat, it’s usually about dominance behavior and/or stress, not sex.

An article by certified professional dog trainer and behavior consultant Pat Miller in The Whole Dog Journal called “Dog Mounting and Dog Dominance Behavior” explains, “Mounting behavior has nothing to do with sexual activity. Rather, it’s often a social behavior, and sometimes a stress reliever. Nonsexual mounting of other dogs is generally a dominance, control, or challenge behavior, although when practiced by puppies it’s primarily about play and social learning, beginning as early as 3-4 weeks. Mounting of humans is strictly nonsexual; it may be about control, it can be attention-seeking, and it can be a stress-reliever.”

In WebMD’s Article “Humping: Why Do Dogs Do It?, David S. Spiegel, VMD, says “in un-neutered and unspayed dogs under a year old, humping is usually sexual in nature. But in older dogs it can be a sign of dominance, a reaction to something that has excited the dog, like visitors arriving, or a sign that a dog hasn’t been socialized correctly and doesn’t know appropriate canine behavior.”

Humping other dogs, male or female, is a problematic behavior for Sanchez. It’s one of the rare behaviors that I’ve chosen to control the environment rather than manage the behavior. I simply don’t expose him to many opportunities to exhibit the behavior. I don’t take him to dog parks, and when we are hiking, I’m very observant of his behavior if another large dog is approaching. If he’s getting excited, I ask him to do something else he’s been trained to do during distractions (such as sit or a trick) and/or I use my body to block the energy between the two dogs. I’ve never been able to figure out why he has a propensity to hump almost exclusively Golden Retrievers, but it also helps me become alert when I see a Golden approaching.

Do your dogs mount other dogs or hump inanimate objects or people? Thanks for sharing your stories below in a comment.

Receive a FREE DOWNLOAD from the Through a Dog’s Ear:

2 thoughts on “Dog Mounting: Is It About Sex?”

Featured Posts
As seen in…