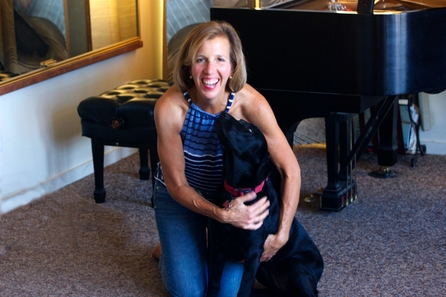 The American Veterinary Medical Association describes the human-animal bond as
“A mutually beneficial and dynamic relationship between people and animals that is influenced by behaviors that are essential to the health and well-being of both. This includes, but is not limited to, emotional, psychological, and physical interactions of people, animals, and the environment.” 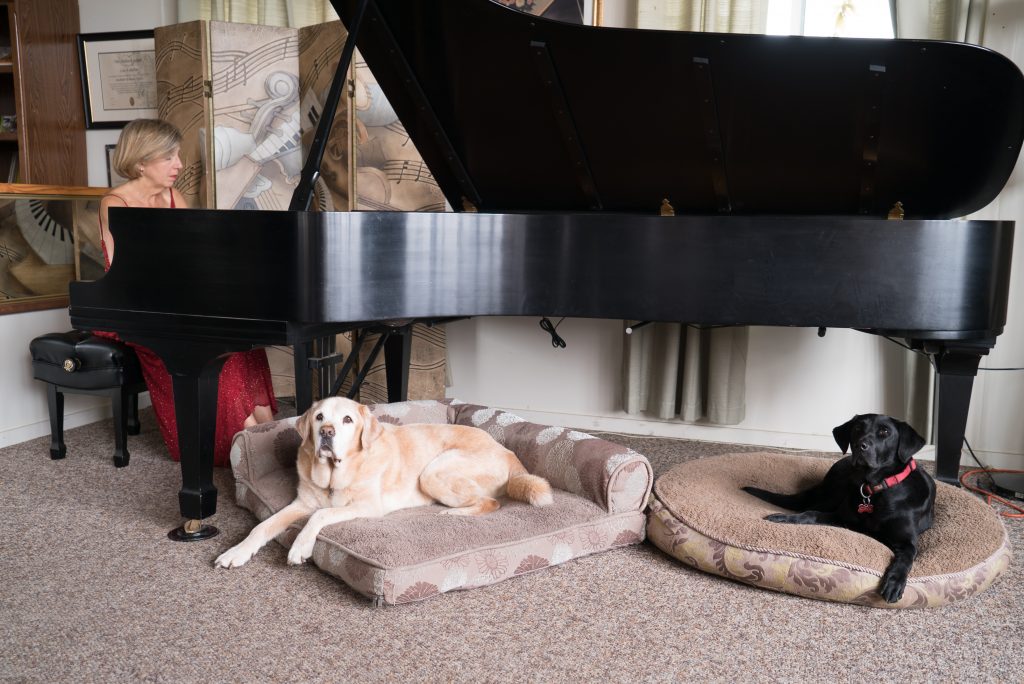 Sanchez and Gina lay by the piano every time I practice my concert repertoire. And, other times, I play music especially designed for dogs for them. There have been some very tender times involving music. But, a shared music experience with Gina in 2013 was one of the most connecting moments of my life. I experienced the human-animal bond at a profound and deep level. Time stood still as we listened to music together. 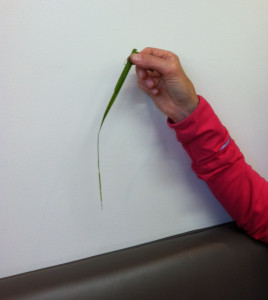 I was with Gina in the compassion room of an ER veterinary clinic. Her lungs were quickly filling with fluid after eating a very thick saw blade grass. Yikes, the very sharp grass blade was over 9 inches!

There was a chance she wouldn’t survive the procedure. The vet suggested I prepare to say good-bye to her, just in case she didn’t make it.

I told the full story at my recent Canine Classical Concert. Click Gina’s picture to watch the short 90 second video. Find out what happened and hear the music that inspired us to deepen our connection.

It was such an emotional experience that it became the inspiration for Music for the Human-Animal Bond. The music creates well-being for all while supporting an emotional connection between people and their beloved dogs. 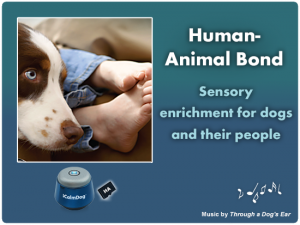 Has music ever deepened the human-animal bond for you and your dog? Thanks for sharing your experiences in a comment below. 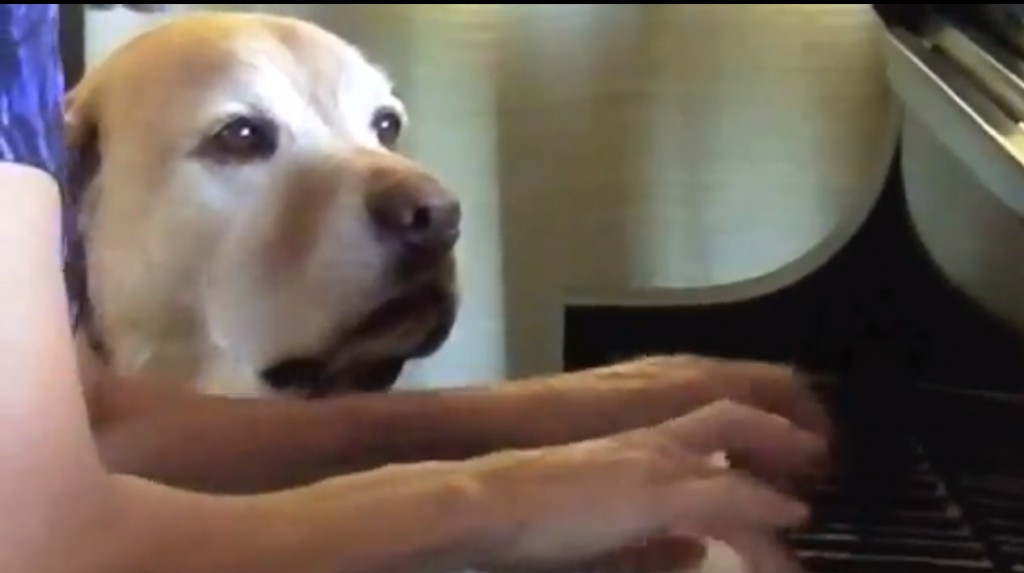 While I record music specially designed to calm dogs, Sanchez and Gina experience the full range of my concert repertoire. In addition to the slowed down, simplified classical arrangements on the Through a Dog’s Ear recordings, I am often practicing music that is loud, fast, and lively.

Keep in mind that I am the person at the piano, so being near the piano for them also means being near me. Sanchez originally taught Gina to go to her bed when I sit down to play the piano. Well, Sanchez isn’t exactly in his bed during the video, but he’s sitting near my side at the piano, looking like he’s either ready to turn the pages (if there were any to turn), is preparing for a nap under the piano, or he’s giving a stress signal.

What does Sanchez think about the introduction to Chopin’s Revolutionary Etude? Click to watch and let us know what you think his reaction says in a comment below.

Receive a FREE DOWNLOAD from our Calm your Canine Companion music series  when you sign up for our newsletter and/or Lisa’s Blog. Simply click here, enter your email address and a link to the free download will be delivered to your inbox for you and your canine household to enjoy!

Truth be told, I am a late night owl and Sanchez and Gina aren’t. They usually go to sleep hours before me. By the time I retire, I listen to Through a Dog’s Ear music to help me fall asleep, not them.

However, our nightly ritual involves me playing the piano last thing every night, just before I go up to bed. While they have a choice of several dog beds, they always choose to sleep on their beds under the piano when I am playing music from the Through a Dog’s Ear 7-CD series.

Do you have a nightly ritual with your dogs? If you haven’t slumbered off into all zzzzzzzz’s watching the video, thanks for sharing your ritual in a comment below.

Receive a FREE DOWNLOAD from our Calm your Canine Companion music series  when you sign up for our newsletter and/or Lisa’s Blog. Simply click here, enter your email address and a link to the free download will be delivered to your inbox for you and your canine household to enjoy!

Have you ever noticed that the best conversations happen around the kitchen table? Joshua Leeds and I were recently sitting at my kitchen table having lunch. We started reminiscing about how our meeting nearly 10 years ago inspired us to create Through a Dog’s Ear, music clinically demonstrated to calm the canine nervous system. We decided to turn on the video camera and make the conversation public. Sanchez and Gina get in on the action and, of course, steal the show!

Have your dogs taught you any life lessons? Thanks for sharing them in a comment below. 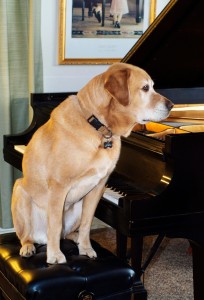 Has my performing life gone to the dogs? You bet! I’m loving it, and dogs are barking for more! Combining my love of dogs with my music talent inspired the creation of Through a Dog’s Ear, music clinically demonstrated to calm the canine nervous system. Now, I’m combining my love of performing to a cross-species audience.

As a concert pianist with a music degree from Juilliard, why am I playing concerts for people and their dogs when I could be filling concert halls with more traditional classical music? Because I REALLY love dogs! And I have chosen to dedicate my career to improving their lives by creating music that improves the quality of their life and provides them with sound therapy for improved health and behavior.

We love our dogs. We bring them into our human world and we expect them to adjust. But the truth is the human world can be very confusing for dogs. And our human soundscape is filled with chaotic sounds that they can’t orient. They are always on alert, wondering if any new sound is safe or not. Part of Through a Dog’s Ear mission is to provide dogs and their people with beautiful psychoacoustically-designed music that creates a healthy sound environment for dogs and their people. The concerts do that, and also offers a bonding experience between the two- and four-leggeds.

It’s an opportunity to share a deeply satisfying musical experience with your dog! Has your dog ever heard Chopin performed live? Have you and your dog ever listened to Bach together in a concert setting?

If you reside in the San Francisco Bay Area, I hope you can make it to one of my upcoming Canine Classical Concerts on October 6th and 7th. And you can meet my own dogs, Sanchez and Gina. As you can see from the photo above, Sanchez is practicing to be the page turner.

Have you ever bonded with your dog by sharing music together? Thanks for sharing your experiences in a comment below.

Have you tried Sound Therapy for your dogs? Through a Dog’s Ear is the only music clinically demonstrated to calm the canine nervous system.

Gina is really a good dog. I’m sure she didn’t purposely eat Santa. She just started chewing on him, and all of his padding must have just been too tempting. I love it that Gina goes nuts over tug toys. While it may appear that she is the villain in this crime, I take full responsibility. Santa was meant to be a tug toy, and I accidentally left him out for her to claim and do with as she must. It really should have been in the toy bin with her other tug toys.

I often need to explain to dog sitters why tug toys are not supposed to be out all the time for her to play with anytime she wants. I prefer that her toys are interactive and require me to be at the other end of them. I would never buy a machine that automatically throws the ball to her, as I want her to know that I’m the one producing the fun. It not only helps build our relationship, but I wouldn’t want to miss out on all the fun either. When she visits other dogs and toys are everywhere, she actually gets way too over-stimulated and acts like a non-stop nervous bundle of energy. In addition to Through a Dog’s Ear calming her nervous system, picking up the toys also helps.

While she actually may be guilty for eating Santa, I confess to co-conspiracy, at least by default. Next time, I’ll leave the Santa tug in the toy bin and get a Michael Vick tug to leave out for her to destroy.

The good news is that all should be calm in the North Pole today. Recently, as part of our “Music in Shelters” program, I sent copies of the Calm your Canine Companion CD’s to the Loving Companions Animal Rescue in North Pole, Alaska.  Since it’s clinically demonstrated to calm both the canine and human nervous system, I hope Mrs. Claus and the North Pole residents are comforted today. I hope they can forgive Gina, especially since she waited calmly while I packaged up 45 CD’s to send to shelters last week. Winners of our annual TaDE Word Game chose their favorite rescues and shelters to receive free Through a Dog’s Ear music, and I played Santa and sent them. It was just my personal way of bringing Santa back to life.

Have you tried Sound Therapy for your dogs? Through a Dog’s Ear is the first music clinically demonstrated to calm the canine nervous system.

Simply click here, enter your email address and a link to the free download will be delivered to your inbox for you and your canine household to enjoy.